Travelling from Budapest to Bratislava

Budapest is beautiful, but if you want to see more of the beauty of Eastern Europe you can travel very easily to other places by train. Last weekend my boyfriend and I went to Bratislava. We took the direct train at Keleti Pályaudvar. The train shuttles approximately every 2 hours from both train stations. You can only buy the tickets at the train station. For only 18 Euros we had a return ticket and after 2 hours and 40 minutes we arrived at Hlavná stanica, the main train station in Bratislava.


It was only a 20-25 minute walk to the city centre. Later on, we realized that all of Bratislava’s historical sites are within walking distance. We could get to know the town on foot! Amazing for a capital city!


The Danube flowing directly through Bratislava adds to the unique atmosphere of this city. So do the narrow streets, the colourful buildings and the many surprising statues. Around nearly every corner you will discover another statue: Paparazzi is watching you, a man invites you to wear his hat, another man is sticking out a hole in the pavement, and you will find a stooping man in the façade of a house. At the main square you will stand next to the man that is overlooking the square while your companion will capture this moment on camera for sure! All these statues will feed your curiosity! 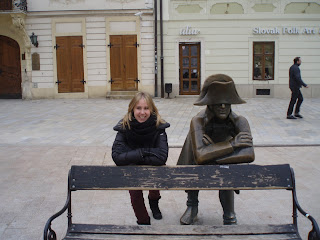 If you start wondering around the centre you will probably notice the small polished brass plates in town in the form of a crown embedded in the floor. Did you know that there are 178 of them? No, I did not count them if that is what is running through your head! I read it in the travel guide we received in the hotel. The crown represents the original route walked by the monarchs.


You need to be ‘’fairly fit’’ to climb the several hundred steps up to Bratislava castle. However, believe me, it is really worth it. When you are at the Castle Hill you will be rewarded with an incredible view of the town, the New Bridge and neighbouring Hungary and Austria. You can enjoy the same view if you take a trip on the lift up to the UFO, while at the same time enjoying a cup of coffee or a meal in the restaurant.


Another attraction that caught our eye was the Blue Church! Many people want to marry here (yeah, how many people can say that they have married in a blue church?!) so the waiting list is very long.


Instead of putting ourselves on the waiting list we went to a coffee house, Coffee and Co! Bratislava has many cosy coffee houses and this is one of them! It has a great atmosphere and the hot chocolate was delicious!


If you like Irish Pubs and live music you should definitely go to ‘’Dubliner’.’  We amused ourselves there for hours!


Bratislava is a one of a kind city. Put it on your bucket list, it is well worth a visit, especially as a daytrip from Budapest. 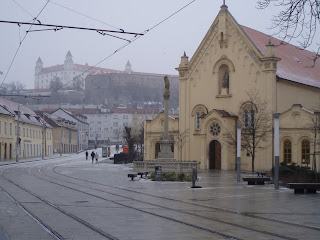